Did you know that lesbians are four times more likely to own a Subaru than any other customer?  No, not because it’s big enough to fit the whole gang on the way to Pride or because it makes moving in together after the second date that much easier. People often joke about the Lezbaru, but the stereotype is more than just that. Subaru has become one of the most well-known LGBT-cars in history for a very good reason. Their marketing team made the active, purposeful decision to target the LGBT community with progressive advertising campaigns way back in the 90’s. This Pride Month, we’d like to give you some history about the little all-wheeler that could and the dedicated team that turned it into the lesbian-mobile it still is today.

Let’s start by pointing out that people in the 90’s weren’t very accepting of the gay community. In SA, homosexuality was still a criminal act punishable by up to seven years in prison. In the US, the Clinton administration had just started their “Don’t Ask, Don’t Tell” policy and the Defence of Marriage Act was at its heels. It’s no surprise that companies using marketing that even hinted at LGBT themes were criticised, boycotted, and even threatened by the public.
The early 90’s weren’t the best for Subaru either. Their sales dropped by more than 14% due to upcoming competitors and failed marketing. Their slump was blamed on inconsistent company strategies that confused and alienated their client base. That is, until Mulryan Nash Advertising came into the picture.

Subaru found that their “sturdy, but drab” cars were popular amongst niche audiences. Subarus weren’t flashy, but they were tough, capable, and practical cars. For this very reason they were popular amongst teachers, medical professionals, outdoorsy types – and lesbians. Tim Bennet, who was director of advertising at the time, found that in states like Oregon, Seattle, and Massachusetts, “the head of the household would be a single person—and often a woman,” who was more often than not a lesbian. After holding focus group meetings, they found out that Subarus were perfect for lesbians’ discreet, usually active lifestyles.

Subaru partnered with dozens of different companies (that catered to certain niches) to offer discounts to patrons when they bought a Subaru. The LGBT companies, like Rainbow Card, drove some of the most sales for years and encouraged the Japanese auto-manufacturer to push forward. 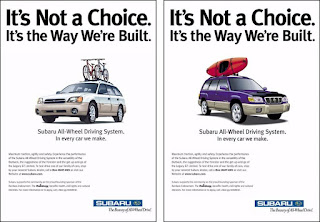 Their marketing tactics weren’t exactly straight-forward (pun intended). Instead of slapping two men kissing on a billboard and saying “Come and get it!”, they opted for very subtle marketing strategies. Their ambiguous slogans could have been construed differently depending on who saw them. “Get out. Stay out” could have simply meant that you should go exploring more – or it could mean coming out of the closet. Their ads also contained references to LGBT pop culture like Provincetown and Xena the Warrior Princess. This marketing technique came to be known as “gay vague” and became fairly popular with many household brands (much later, of course). 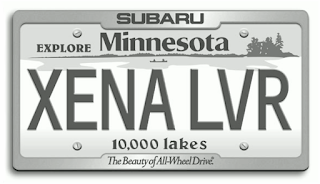 Don’t misunderstand. Subaru never hid their support of the gay community. They openly funded events, donated to charities and partnered with companies that were involved in/part of the community.  Many companies were completely on-board with the idea.
When one Subaru ad man, Tim Mahoney, proposed the gay-targeting ads in talks with Japanese executives, the executives hurriedly looked up “gay” in their dictionaries. Upon reading the definition, they nodded at the idea enthusiastically. Who wouldn’t want happy or joyous advertising?

Some members of the public (and even some Subaru team members) did not appreciate this open support of the gay community. Subaru started receiving several letters from people stating that they would never buy a Subaru again in their lives after they saw the campaigns. Instead of being dismayed, Subaru did some research. Almost none of the people who responded negatively to their ads had ever actually bought a Subaru. Some of the letters even misspelled their brand name. Needless to say, Subaru simply kept going. Their team was committed to supporting a community that they believed to be under-served and “the perfect customers”.

Subaru’s unflinching support was definitely part of the reason why countless brands and companies are now sporting rainbow logos in the month of June. Subaru’s success in the face of adversity has spurred other automotive manufacturers to follow suit. Many are using trendy photography and quirky taglines that are much bolder than what Subaru started with, but never forget who paved the way.